Read how Sheridan Electric helped an automotive customer upgrade an obsolete robot within a CNC grinding machine that had reached its end of life.

An automotive customer had a CNC grinding robot machine that was critical to their operation. They were concerned about the reliability of the Bosch SCARA robot inside the machine, which had reached its end of life. 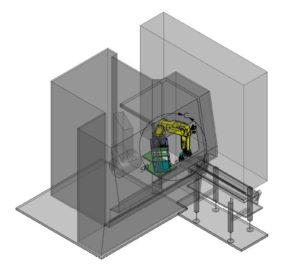 The challenge was unique: Replacing or programming the CNC controller was not a viable option. The project would be too risky if the controller required any changes. Therefore, we would have to make the new robot work with the old systems controls structure. The equipment was over 30 years old. So before any work could begin, we had to fully document and verify all operations, setup differences, and settings of the machine. The original manufacturer offered no support, and all documentation was in German. Furthermore, downtime had to be minimal. The customer was relying on this machine for production, and time was of the essence to get back up and running once the work started. 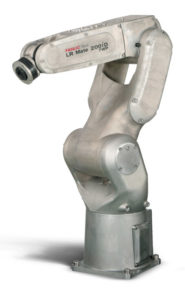 Sheridan’s Automation Group was up for the challenge. We were responsible for all mechanical and electrical aspects of the job, including design, installation, and start-up commissioning. After verifying and documenting the signals and timing from the CNC controller, the next task was to put together an integration plan. Fortunately, the Siemens and LTI drives inside the machine were still in good condition. So we could trace and verify all signals.

The team chose a new FANUC LR Mate 200iD/7WP to replace the existing SCARA robot. New Robot End of Arm Tooling reach studies, cycle time analysis, new baseplates, pneumatics, plumbing – all of this was needed, and more. Working with our mechanical partners, we designed a new arrangement with a Double Schunk Gripper for the parts and cycle time. After customer approval, we installed the new setup. We completed all DCS setup to avoid collisions and all offline programming using FANUC ROBOGUIDE. We then completed the electrical schematics to show the new robot-to-CNC connections, robot connections to the tooling, and pneumatic diagrams.

Once field work began, the team moved quickly to remove the old components, and set to work installing and wiring the new devices. The team installed the new robot pedestal, mounted the LR Mate in place, and finished the plumbing and electrical wiring of the EOAT devices. As soon as they completed the IO checks, the commissioning could begin. They completed the final robot programming and finalized all ranges of motion and pick & place points.

All the hard work paid off: Commissioning and start-up went fast and well. Once the different stakeholders signed off on the system, it was brought back into production. The Sheridan team provided onsite standby support, while finalizing the training manuals, as-built packages, and technology handoffs with the customer.

Sheridan’s team of industrial automation professionals have decades of hands-on factory floor experience and a track record of success. Contact us to engineer and implement a controls solution tailored to your unique needs and budget.